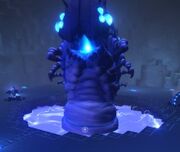 Upon arriving at the Ancient Lair, you will have to navigate over 4 floating platforms to gain access to the drop hole into the boss arena below. A single harmless Electro Worm Tail will be on the platform. If the player kills the Electro Worm Tail the Ancient Evil Electro Worm will spawn from the central pit. You must run around dodging both of his projectile attacks. The technique to dodging the attacks are exactly the same, stand in a single place for a second and await the moment he fires his projectile. Upon shooting the projectile move or roll to a new location. The projectile will not follow you. It will land in the area where you were standing at the time of him releasing the projectile from his mouth, giving you time to move out of the way with ease. With basic maneuvers and paying close attention to if its an air projectile or a straight shot projectile it is an easy process to master. Once you are comfortable with the moving around and dodging of the Ancient Evil Electro Worm's basic attacks, you can begin the second stage. Throughout the battle he will summon Electro Maggots onto the platform along with Worm Tails(3+1 for each player), you must destroy all of the Electro Worm Tails before you can attack him. You can take your time doing this just keep avoiding the Ancient Evil Electro Worm's attacks, if you need any health or mana in the process you can kill the Electro Maggots, they will drop both mana and health orbs.

After destroying Electro Worm Tails the boss will pass out, the Ancient Evil Electro Worm's head will land on the platform. The amount of tails you have to destroy will vary depending on the player count, just as the spawning itself. It does not matter what class you chose (Ranger, Warrior or Mage) but before the battle you should have crafted the spell Poison Rain, Run straight to his head on the platform and activate your War Cry spell, and use your Poison Rain spell as close to the head as you can, then begin a full on attack with your weapon.

After completion, the same as the Ancient Worm the loot will fall from the sky and land in the center pool of water. Jump into the water and collect your loot, around the outer ring of the steam above you will see small steps to get back up to the platform.

There is no exit portal for the Ancient Evil Electro Worm like previous bosses so you must portal back out using the map screen.