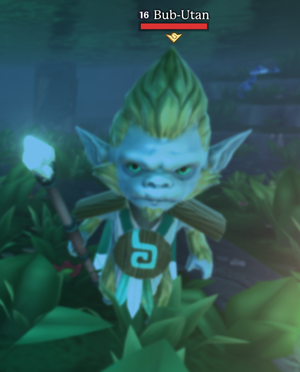 Bub-Utans are elusive creatures found underwater. They can be encountered after flooding large portions of land with water, either during an event or using Water Bombs.

A Bub-Utan attacks from a distance with electricity blasts from its staff. When it gets down to 50% health it will shield itself in an air bubble, preventing all damage for a short period of time. Unlike the shield of Alp-Utan, this one does not immobilize the enemy, meaning that when dealing damage it can be knocked back along the floor. After the shield is down, it will continue attacking until lost or killed. After dying they will drop a few air bubbles which will replenish players' oxygen meter.

Any island with large pools of shallow water (at least 3 blocks deep).