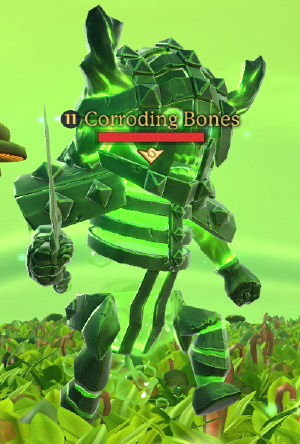 The Corroding Bones is an aggressive creature and will attack a player on sight. It moves very slowly so it doesnt offer much of a fight. It does have the ability to teleport to the player's immediate vicinity if one get to far away during combat.

The Corroding Bones has one attack in which it strikes the player with a short sword dealing earth elemental damage. Evading this move is easy as it telegraphs its attack by drawing back the sword for a second. Dodging back is the easist defence. Melee characters can simply hit the enemy when it is not attacking, and ranged characters can take advantage of any open space to attack it from outside of its attack range.

The Corroding Bones can be found on the following islands: