The Dragon Queen is the second boss the player will encounter. She has her own island arena, a level 20 area, the Dragon's Lair. 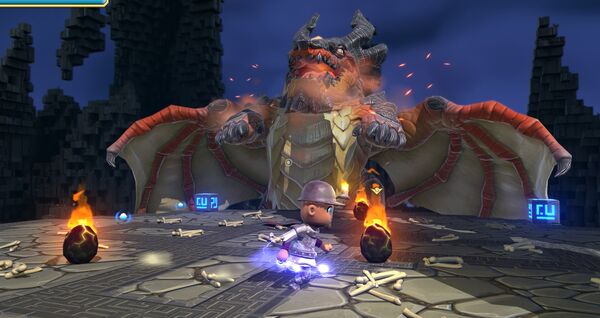 When arriving at the arena, a single flaming egg can be seen. Until the player strikes this egg, nothing will happen. Once struck the egg will be sent flying towards the hills in the background and this will summon the Dragon Queen. The boss attacks by breathing flaming eggs that always fly toward the player. At first the player cannot attack the Dragon Queen directly. By striking the eggs, it is possible to hurl them at the boss. If an egg hits the boss, she will be stunned.

Once stunned, the dragon can be attacked and her health will diminish. The stun will last 10 seconds or so. Once this time is up, she will wake up and all eggs on the platform will spawn Saurian Flames that will attack the player.

The Dragon Queen cannot damage the player other than by hitting them with the eggs. Always face the boss and simply avoid the eggs. It's quite easy to never take any damage. Striking the eggs randomly will rarely hit the boss. Wait until the boss is about to shoot then launch an egg at her. Be wary of not falling off the arena platform! The Dragon Queen is very vulnerable to Water Damage. Using a weapon that has this type of damage will greatly help.