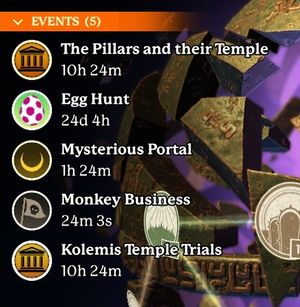 Many events happening at once, as shown on the map.

Random events that appear on the world map after you have reached the fourth island, whether Shrieking Sands or Autumn Springs.

Most events last 6h (which immediately turns into 5h on the UI with 59m not showing), and others are shorter, longer or even seasonal. A new event pops up every 6 hours and an event-timer is recorded inside the world save file. If you turn your system clock to the future and pop-up an event and come back, you will not see next another event until that time has actually come. There are Steam achievements that require you to complete 50 and then 200 events. By repeatedly deleting an old world, creating a new one, reaching the fourth island and completing the event that pops up, you can speed this up.

Event's spawn levels are based on the character you choose before either entering an island or opening the world map. Most events will be 2 levels above the said character level but all the important drops (from creatures and chests) will be the same regardless of the event's level. In case you character level is lower than the island, the event will spawn based on the island and not your character level. That means you can spawn an event with a lower level character to have weaker foes and actually complete it with a geared, higher level one. The only way to be sure all events will spawn on low levels, is by keeping a world with only 4 islands and always check that world with a low level character. Keep in mind that some events will be influenced by the character level and some events will not spawn until you reach certain areas or islands with specific biomes.

Certain events may spawn in creatures that will be the same as those on the island. In such case, the islands natural inhabitants will not count towards the event counter, despite being technically the same.

Since update 1.3, all events levels will be random and based on character/island levels.

No events will spawn on "Fort Finch", or "Hintertown".