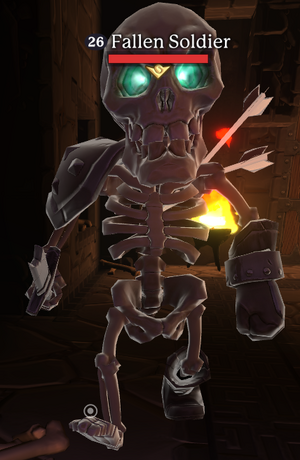 The Fallen Soldier is an aggressive creature and will attack a player on sight.

The Fallen Soldier has one attack in which it strikes the player with it's sword. Evading this move is easy as it telegraphs its attack by drawing back its sword for a second before striking giving the player ample time to dodge, however it is advised that you dodge backwards as dodging to either of the sides at the wrong moment will still result in you getting hit. Melee characters can simply hit the skeleton when it is not attacking, and ranged characters can take advantage of any open space to attack it from outside of its attack range. This can jump up to 2 blocks high to pursue or try to attack the player.

The Fallen Soldier can be found anywhere in castles, dungeons and mines. It is not specifically credited on the monster summary page of an island.