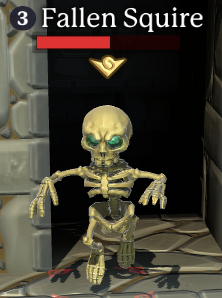 The Fallen Squire is a fast and aggressive skeleton. It deals a small amount of physical damage by slashing wildly at the player with its arms and hands. Once locked onto its target it will pursue and is almost impossible to outrun.

The Fallen Squire can be tanked pretty easily as it dies quick and does little damage. Running away from it should be avoided as it is very fast. It cannot easily get over obstacles but can't climb high ledges so it's possible to shoot it from above if you are ranged.

The Fallen Squire can be found anywhere in castles, dungeons and mines. It is not specifically credited on the monster summary page of an island.