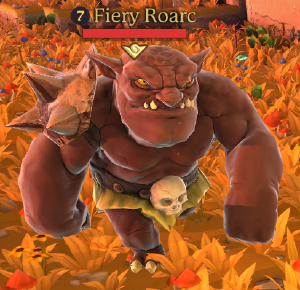 The Fiery Roarc is an aggressive creature and will attack a player on sight. After a few hits, it will adopt a defensive stance in which it is briefly immune to all damage.

The Fiery Roarc will attempt to walk towards the player and bash with both hands. The strike will also launch a ball of fire that travels a short distance. After a while, it will split in two. Simply walking away when the creature lifts its arms to attack will avoid any damage. It is best to dodge to the side to also avoid the ball of fire. They can also get enraged.

The Fiery Roarc can be found on the following islands:

The Fiery Roarc also appears on any island during the Orc Brothers event.