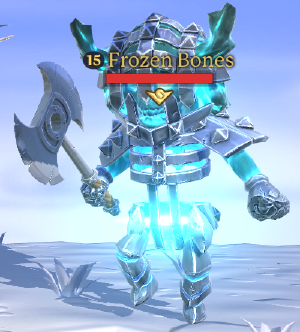 Frozen Bones
This article is a stub. You can help Portal Knights Wiki by expanding it.

The Frozen Bones is an aggressive creature and will attack a player on sight. It moves very slowly so it doesn't offer much of a fight.

The Frozen Bones has two attacks in which it bashes the player with a big axe. Evading this move is easy as it telegraphs its attack by drawing back its axe for a second. Dodging back is the easist defence. Melee characters can simply hit the enemy when it is not attacking, and ranged characters can take advantage of any open space to attack it from outside of its attack range. The other attack enlists of throwing a ball of electricity from its axe. All you need to do for this attack is look where it will land and dodge.

The Frozen Bones can be found on the following islands:

The Frozen Bones also appears on any island during the Gang of Bones event.