The Hollow King is the third and final boss the player will encounter. He has his own island arena, a level 30 area, World's End 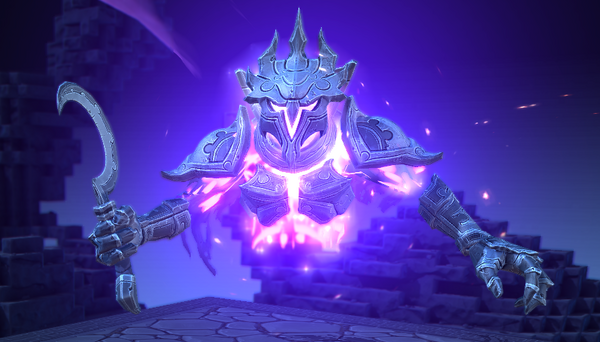 When arriving at the arena, The Hollow King awaits, along with 3 (sometimes 4) Shadow Crystals. Until the player strikes one of the crystals, nothing will happen. Once struck, the boss will begin attacking the player. The Hollow King spins toward the player in an almost unavoidable attack with his giant sickle: The Spin Sickle! Fortunately, this attack does a minimal amount of damage. Following the Spin Sickle, the king proceeds to hurl three volleys of astral orbs at the player. These are devastating if not dodged. Meanwhile, the player can attack the Shadow Crystals. 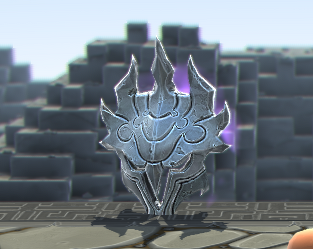 Once all crystals are destroyed, the Hollow King will revert to icon form and be vulnerable to attack. If at any time the player leaves the platform, the player will be safe but the fight will be fully reset.

If the player concentrates on dodging the astral orbs then they won't take much damage. Failing to do this will be costly! That doesn't leave much time for attacking the crystals. Use the auto-lock feature to lock on to a target then face the boss to dodge the volleys while blindly attacking the crystals. The boss is very vulnerable to Light Damage and resistant to Dark Damage, so choose your weapon or spell accordingly.

The Hollow King will often drop Recipes and may sometimes drop 3 or 4 ones (all different). The recipe for Relic of Light does not count towards those, so if you are one extremely lucky drop God, he may drop it along with 4 other recipes.