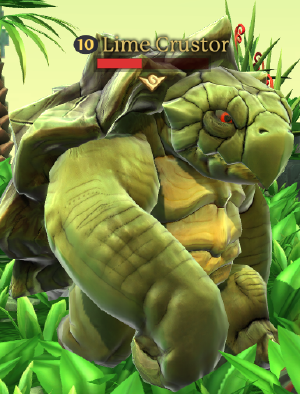 The Lime Crustor is an aggressive creature and will attack a player on sight. Unlike is smaller shell cousins, the Crustor is always standing and can be seen from afar due to it's large size. The creatures walks slowly towards a sighted player.

The Lime Crustor will not directly attack a player. It will instead slam it's fists on the ground and cause an earthquake that does damage indirectly. When struck a few times, it will recoil on itself and briefly be invulnerable to all damage.

The Lime Crustor can be found on the following islands: