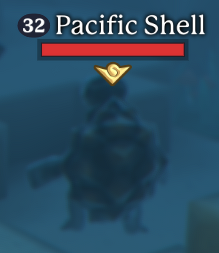 The Pacific Shell is an aggressive creature and will attack a player on sight. The Pacific Shell only appears in water and only during the It lurks in the deep... event. It is one of the objectives of that event.

The Pacific Shell will act differently to all others of the shell type. Once it starts spinning, instead of coming towards the player it will stand in one spot, shooting water projectiles at the player. The attack last shortly and in-between two attacks the enemy will not hurt the player. This makes it an easy foe. On death they will drop air bits that will replenish players Oxygen Meter. This way after killing one there will always be time to leave the pond.

The Pacific Shell can be found on any island but only during the It lurks in the deep... event.